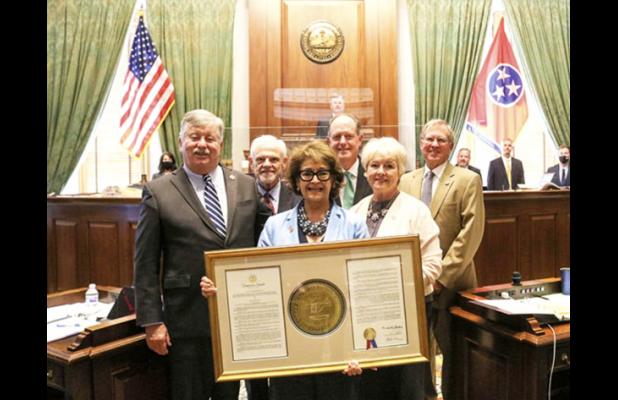 Longtime Tennessee legislator Senator Dolores Gresham (R-Somerville) was honored Thursday June 11, 2020 before the Senate with a joint resolution upon the announcement of her retirement.
“A fearless champion for the children of Tennessee, Senator Gresham presided over and led the Senate Education Committee during the time of the greatest improvement in academic achievement in the history of the State,” states SJR 1280.
Senate members recounted stories of their time serving with Gresham and thanked her for being a dedicated servant leader to the state.
“She has been an excellent chairman of the Education Committee,” said Lt. Govenor Randy McNally (R-Oakridge) “You’ve been a great friend to all of us and a great leader.”
“One thing I know about Chairman Gresham from her service in the United States Military, her service in the House of Representatives, her service in her community, her love of her family and ultimately her service in this body as the chairman of the Education Committee the state of Tennessee is better for her service and we are grateful for that,” said Senate Majority Leader Jack Johnson (R-Franklin).
“Dolores Gresham is an outstanding senator because she is an outstanding person,” said Republican Caucus Chairman Ken Yager (R-Kingston). “She is a person who is grounded well in her faith and you see that faith exemplified in her principled stands she makes here on this Senate floor. She is leaving mighty footprints here in the sands of time.”
“I can only tell you that my message today is gratitude for the high adventure of being a senator,” said Gresham in an emotional farewell to her colleagues. “Finally I am most grateful to the people of Chester, Decatur, Fayette, Hardeman, Hardin, Haywood, McNairy, and Henderson Counties who allowed me to serve them.”
Senator Gresham, a retired U.S. Marine lieutenant colonel, was elected to the Tennessee State House to represent District 94 in 2002. She was later elected to the Tennessee State Senate in 2008 where she has proudly represented District 26.
Gresham and her husband, Will, live on a farm in Fayette County.