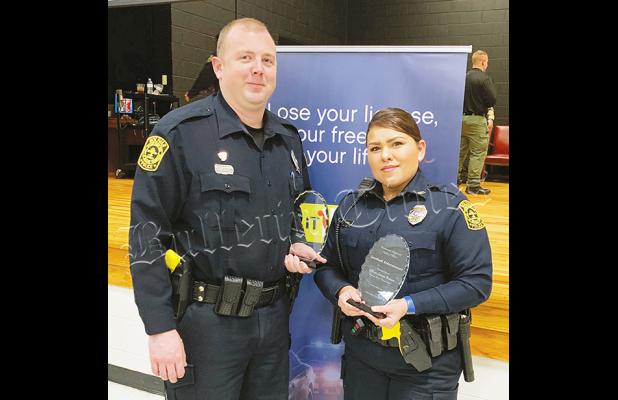 The Bolivar Police Department Officers Nelly Munoz and Chris Wilkerson have been awarded the Seatbelt Enforcement Award and Child Passenger Safety Award (respectively) by the Tennessee Highway Safety Office (THSO).
The West Tennessee Highway Safety Awards are given each year to show appreciation for officers, troopers, and deputies that have excelled in highway traffic safety initiatives, such as speed enforcement, occupant protection, distracted driving, and impaired driving.
Officers Munoz and Wilkerson were honored at the THSO West Tennessee Annual Law Enforcement Awards Meeting held on December 10, at the Madison County Sheriff’s Office West Tennessee Regional Training Center.
Officer Munoz was nominated for the Seatbelt Enforcement Award as part of the department’s participation in the THSO SAFE Campaign. Officer Munoz topped the department in making occupant safety and protection a priority throughout 2019. Officer Wilkerson was nominated for the Child Passenger Safety Award for prioritizing child passenger safety and for his aggressive public education program on child safety seats.
“It is a tremendous honor to be recognized by your peers in the law enforcement community. I am very proud of both Officer Munoz and Officer Wilkerson for their commitment to public safety and for representing the Bolivar Police Department in such a positive manner,” said Bolivar Police Chief Michael Jones.
Officer Munoz has been a law enforcement officer for 10 years and has dedicated the last eight years of her career to the Bolivar Police Department. Officer Wilkerson has 14 years of law enforcement experience and joined the Bolivar Police Department in 2019.