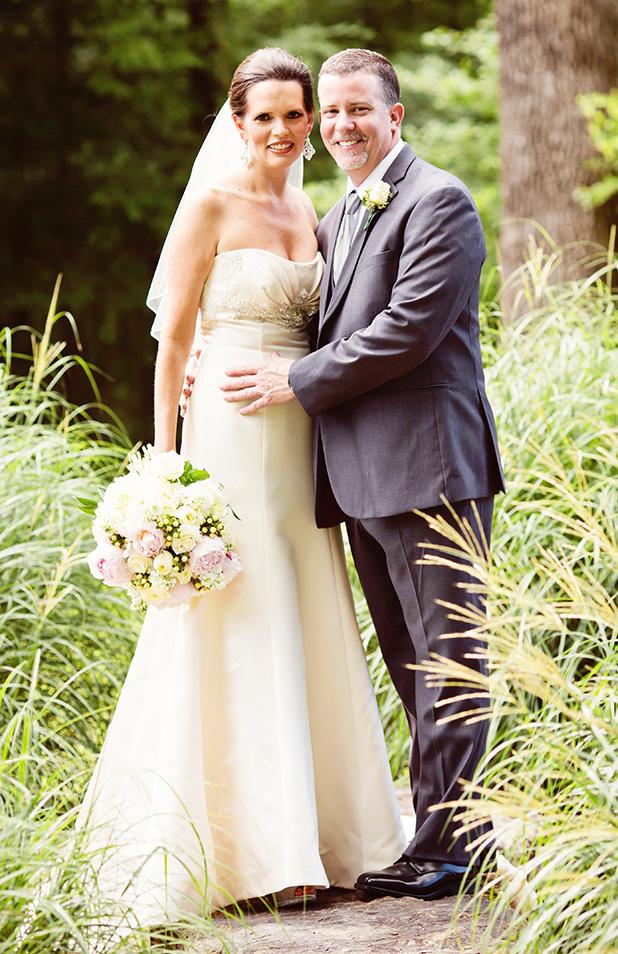 Tonya Jean Wells and Ronald Eugene Taylor were united in marriage at half past six o’clock in the evening on June 27, 2015, in the Four Seasons Garden at Heartwood Hall in Rossville, Tennessee.  Reverend Dan Weathersbee performed the double-ring ceremony.  The bride is the daughter of Mrs. Ann Sexton Wells and the late Mr. B. Gene Wells of Saulsbury, Tennessee.  She is the granddaughter of the late Mr. and Mrs. Giles Charles Sexton of Roger Springs, Tennessee and the late Mr. and Mrs. William Benjamin Wells of Saulsbury, Tennessee.  She is a graduate of Fayette Academy and earned a Bachelor of Business Administration from Mississippi State University.  The groom is the son of Mr. and Mrs. William Eugene Taylor of Collierville, TN.  He is the grandson of the late Mr. Gino Lepri Sr. and the late Mrs. Clara Lepri of Pine Bluff, Arkansas and the late Mr. and Mrs. Jewel Madison Taylor of Pine Bluff, Arkansas.  He is a graduate of Memphis Catholic High School and earned a Bachelor of Business Administration from the University of Memphis.
Surrounded by roses, azaleas, crepe myrtles and a Boxwood Hedge, the Four Seasons Garden was the ideal setting to enjoy the outdoor wedding ceremony.  An elegant glass enclosed atrium with wooden doors and an exquisite chandelier provided the perfect backdrop for the ceremony.  The bride wore a classic fit and flare silhouette with princess seams in a champagne color. It had a strapless ruched soft sweetheart neckline with beadwork and embroidery under the bust; the train was decorated with beadwork and embroidery and matching sleek satin buttons down the entire train.  Complementing the bride’s ensemble was a hand tied bouquet with mix white hydrangea, cream eskimo roses, cream patience garden roses, cream hypericum berry, blush pink peonies and white stock tied with a cream french ribbon wrap. Affixed to the bouquet was a handkerchief that belonged to her late father.  The bride placed a single white rose on her father’s chair as a symbol of his presence.
Attending the bride as her maid of honor was Kayli Alexis Taylor, daughter of the groom, from Collierville, Tennessee. Matron of honor was Kimberly Buskirk Felder, friend and sorority sister of the bride, from Madison, Mississippi.  Bridesmaids were Allison East Latture, friend and sorority sister of the bride, from Frisco, Texas and Donna Renee Rucker, friend of the bride, from Olive Branch Mississippi. Serving as junior bridesmaid was Regan McKensie Felder, daughter of the matron of honor, from Madison, Mississippi.  Bridesmaids wore navy one-shoulder knee-length dresses and carried hand tied bouquets that complemented the bridal bouquet. Also attending the bride was Courtney Paige Stephens, goddaughter of the bride, from Oakland, Tennessee.
Serving as best man was Chase Alexander Taylor, son of the groom, from Collierville, Tennessee. The groomsmen were Nathan Taylor Binkley, nephew of the groom, from Maumelle, Arkansas, Stephen Patrick Albers, friend of the groom, from Collierville, Tennessee and Robin Lee Zich, friend of the groom, from Madison, Alabama.  Seth Whitfield Daniel, friend of the bride, from Saulsbury, Tennessee served as usher.
Following the ceremony, a reception was held in the Barn at Heartwood Hall, where guests were treated to a buffet style dinner and danced to music from Deep Blue Entertainment. The Barn provided the perfect backdrop with its open ceiling, wooden beams, and beautiful hardwood floor.  The bride’s cake was a four-tiered cream and white confection with alternating rows of hydrangeas and roses. The groom’s cake was a two tiered red velvet cake decorated with a University of Arkansas theme. Both cakes were created by Laurie Scott. Holliday Flowers created the handmade floral arrangements featured at the ceremony and the reception. As the night concluded, the couple departed through sparklers held by their friends and family along with cowbells ringing in the background as a nod to the bride’s alma mater.
Following their honeymoon to Negril, Jamaica, the couple resides in Collierville, Tennessee.