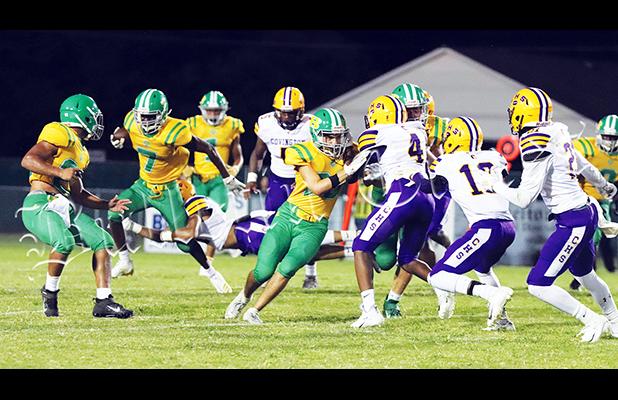 Tiger football teams in Hardeman County dropped region games on September 6 to storied programs in the state.
Middleton (0-3, 0-2) managed a 6-6 first quarter tie with Wayne County, but were outscored 22-12 in the second quarter enroute to 48-26 loss at T.D. Owens Field in Middleton.
Quarterback Luke Turner completed 14 of 30 for 139 yards and two touchdowns, while running back Tavaris Morgan ran 12 times for 109 yards and a touchdown.
Middleton will travel to Walnut on September 13.
•••
Bolivar Central had their highest offensive putout of the season but fell to #2 ranked Covington at R.A.Butler Field in Bolivar by a 41-0 margin.
The Tigers improved on offense, moving the ball for 89 net yards, 91 of them in the air. Quarterback Tyler Rice completed 11 of 25 for 91 yards and was named the Vaughan Oil Player of the Game.
Bolivar (0-3, 0-1) will host Jackson North Side at home on September 13.
Covington (3-0, 1-0) has won 30 regular season games in a row, losing the last two years in the state championship game to Alcoa. The win over Bolivar was their 13th straight victory in a region game.
Photo by Sarah Rice.