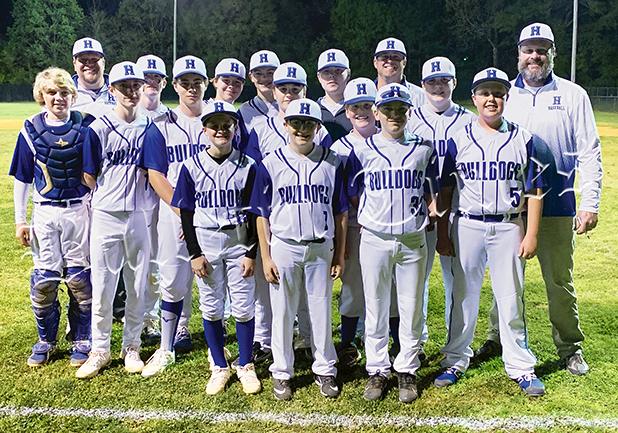 Hornsby’s Dylan Hill pitched a one-hit shutout, striking out ten while walking just three as Hornsby won their first Hardeman County Middle School Baseball championship since 2016 with a 2-0 win over Bolivar Middle in the championship game on April 15.
The Tigers, who beat Middleton in the semifinal, only got two baserunners as far as second base in the final game.
Hornsby’s runs came in the first and third innings as Dalton Bissett reached base on a walk and an error and came around to score. Bissett stole second and third each time, scoring on a passed ball the in first inning and on a fielder’s choice in the third inning. Peyton Maxwell of Bolivar gave up the two runs, with only one of them earned, walking five while giving up just one hit. He struck out five in the loss.
Bolivar made the final with a six-run final inning to beat Middleton 9-8. Kingston Golden got the win in relief of Zach Bruce for Bolivar.
Bolivar struggled on defense on the night, committing nine errors in the two games. Only two of the ten runs the Tigers allowed were earned.
Hornsby has now won the event twice, tying Middleton for victories. Bolivar, who won it in 2019, has seven titles.