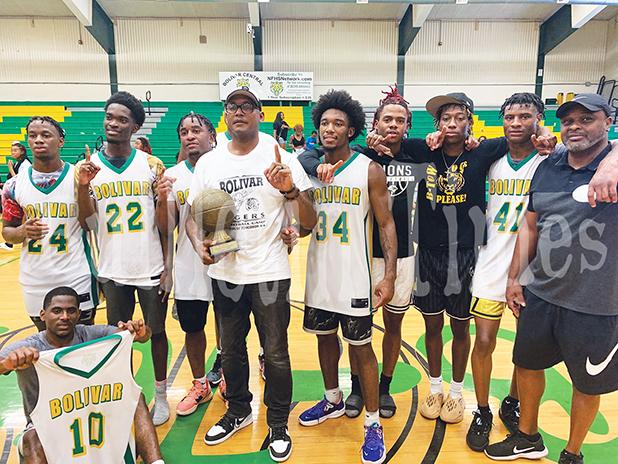 A good fan turnout, refreshments, giveaways and seven basketball games kept the entertainment level high from 9:00 a.m. until after 5:00 p.m. as Bolivar finished off the 2014 Jackson South Side State Championship team 69-66 to win the title.

Bolivar began with a 58-43 win over Jackson South Side 2021 32-0 team that saw their season cut short due to COVID. Christian Clark led Bolivar with 12, while Jaquan Lax had 11, and Toris Woods had 10. Rico Sain led South Side with 18.

Bolivar’s second game saw them face Haywood, with Jordan and Jarvis Varnado. Bolivar trailed 49-41 at the half, but stormed back to win 71-63. Toris Woods led with 16, while Lax had 10. Jordan Varnado led Haywood with 22 points, 21 of them in the first half.

The championship game also saw Bolivar trail at the half by a 43-35 score, but with Lax, Brandon Neely, Clark, and Henderson sitting out the second half, Bolivar’s Toris Woods scored 14 of his 25 points to spur Bolivar onto victory. Isaiah Perry hit four free throws in the last thirty seconds to seal the win. Rand Smith led South Side with 21.

Toris Woods, who was Tennessee’s Mr. Basketball in 2021 and averaged 17 points per contest, was named the tournament MVP.