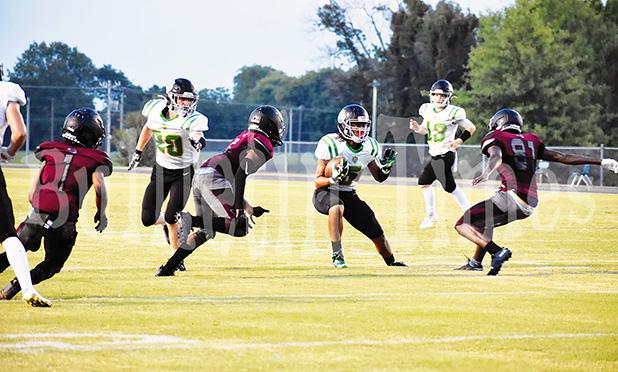 Bolivar Central Football beat Liberty for the first time since 2006 and for second time in 10 meetings with a 51-33 win in Jackson on August 26, avenging a COVID loss Bolivar had to take last season in week two.

Quarterback Carson Howell threw for 388 yards and four touchdowns, ran for 105 yards and a score as Bolivar (1-1, 0-0) topped the 50-point mark for the first time in four years. Howell connected with Cuaron Price (see photo right) nine times for 113 yards and a TD and with Josiah Clark nine times for 168 yards and three scores.

Howell’s two game total of 576 yards passing is the highest total by a Bolivar quarterback since at least 2008. Also, the 576 yards in the air was shown as the Tennessee leader by MaxPreps. Receivers Price and Clark were listed in the top four as well.