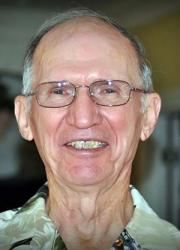 Loyd Thomas Hight, 85, of Bolivar, departed this life on Monday, Feb. 22, 2016.
Born to the Late Tom E. Hight and the late Stella Church Hight of Brownsville, on July 1, 1930, Loyd was the third of five children. He graduated from Haywood County High School in 1948 and served in the United States Air Force, as a staff sergeant from 1949 – 1952. He received several Medals of Honor, including a Bronze Star, for his service in the Korean War.
While being stationed at Barksdale Air Force base in Shreveport, La., he met the love of his life of 63 years, Doris King Hight. They met at the Louisiana State Fair.
Upon returning to Tennessee, Loyd joined the United States Postal Service, where he worked for more than 25 years, and finished his career as Postmaster General in Somerville, Tennessee. He was an active member of the VFW and Lions Club, as well as the Methodist Men’s group at Bolivar First United Methodist Church and served the church in many capacities. He loved gardening, woodworking, and fixing things.