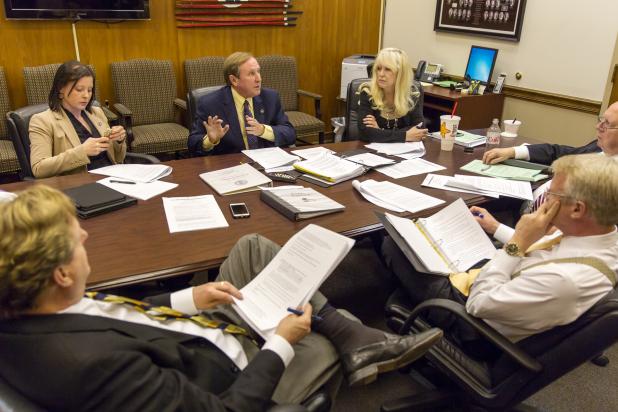 No public notice is given for the time or location of the meetings held at odd hours by at least 10 of the 15 standing committees in the House.

Supporters say the pre-meetings allow free-flowing discussion about bills without lobbyists, the media or parliamentary procedure. But without public access, it's impossible to verify whether lawmakers are keeping promises that they are not predetermining the outcome of later committee votes.

"Our committees publicly debate each bill and do not meet in private before a meeting to discuss outcomes," Ramsey wrote in the letter.

During national Sunshine Week, media organizations focus on transparency in government. The Associated Press, the Chattanooga Times Free Press, The Commercial Appeal of Memphis, the Knoxville News Sentinel and The Tennessean of Nashville all reported on the House's pre-meeting discussions.

Republican House Speaker Beth Harwell of Nashville told reporters she leaves it up to committee chairs to decide whether to hold pre-meetings. But the Nashville Republican said she never did it when she was a committee chairwoman before she became speaker.

"There's nothing that's discussed that won't be discussed in the open," Harwell said. "I think it's more gaining information that takes a little longer than you might think."

After being pressed for more information about a pre-meeting of the House Civil Justice Committee in her conference room on Monday, Harwell persuaded Chairman Jon Lundberg, R-Bristol, to admit the media.

"It just wasn't that big a deal," Lundberg said afterward. "We can't take votes. But the neat part here it's very free-flowing as you saw."

Last week, a subcommittee of Civil Justice Committee killed off some controversial gun bills with little debate, giving rise to speculation that lawmakers had already made up their minds before the panel met.

"Substantive discussion about bills, about changes in bills, about strategies — that needs to be exposed to the public," Cunningham said.

After Harwell was challenged by reporters about the practice, the chairmen of several other committees allowed reporters in to their pre-meetings.

The Tennessee Constitution mandates that: "The doors of each House ... shall be kept open, unless when the business shall be such as ought to be kept secret" and that it "shall be free to every person to examine the proceedings of the Legislature." But the General Assembly is exempt from sunshine laws on open meetings and records that govern the executive branch and local governments.

"When the Democrats were in control ... the door was closed and decisions were made," said Casada, R-Franklin. "Under the Republicans, it's just a good way for the attorneys, and the members to just sit down and make sure that everything is in order."

Casada said he would be open to changing the practice if there's enough concern.

"If there are individuals who think it's secretive, it's manipulative, maybe we need to look at it," he said. "But I would submit, it's not what you think it is."

Republican Rep. Jeremy Durham, a member of the insurance and banking subcommittee, said the panel holds pre-meetings for lawmakers and staff, as well as "stakeholder meetings" for lobbyists and advocates. He said the meetings aren't meant to be used to persuade colleagues to vote for or against bills, but he acknowledged that the chairman will sometimes ask for a "show of hands" to gauge support.

Given that there is no public notice for the pre-meetings, Durham was asked by a reporter how people find out about when they are supposed to take place.

"Probably word of mouth," he said.