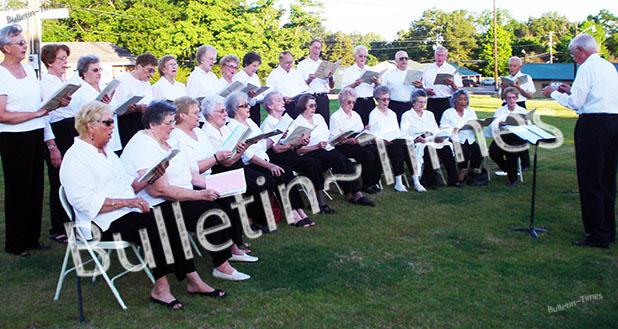 Music on the Square. A Smithsonian Museum connection?

Is Bolivar’s Music on the Square attributable to the Smithsonian Museum? A review of Music on the Square’s beginning certainly points in that direction. Did the museum actually come to Bolivar and start Music on the Square? No. Did the museum request it or even suggest it? No. Did it cause the birth of Music on the Square? Here’s the story. You decide.
In 2008, Cyssie Pierce, President of the Association for the Preservation of Tennessee Antiquities (APTA), was working hard to promote the Bolivar’s Little Courthouse museum. “In searching for ideas, I found the Smithsonian had an exhibition about the history and influence of music throughout the United States. I asked them to come here and they accepted,” she said.
As part of the exhibition agreement, the museum sent a team to Bolivar to conduct training for locals on various topics designed to make the event successful. One segment of the training was “Merchandising”. APTA was required to come up with a “merchandising program” in advance of the exhibition’s opening. “Their training was very helpful in making the event successful,” said Pierce. “I began to search for something unusual to fulfill the merchandising requirement.”
Pierce and another APTA member, Ken Savage, began to discuss various ideas. A series of free weekly concerts during the month leading up to the exhibition was one idea. “I thought that might be a great idea if we could get some local groups to participate,” said Pierce. “I talked to Lee McAlpin and asked if he and his brother would be willing to perform. He told me the whole band needed to rehearse and they might as well do it publically.” With that commitment, 10-O-C became the first lead act for the Smithsonian exhibition merchandising effort. Pierce managed to add the First Baptist Church choir as the opening act. On June 6, 2008, “Music on Market” as it was originally called, held its first concert in the vacant lot across from the courthouse.