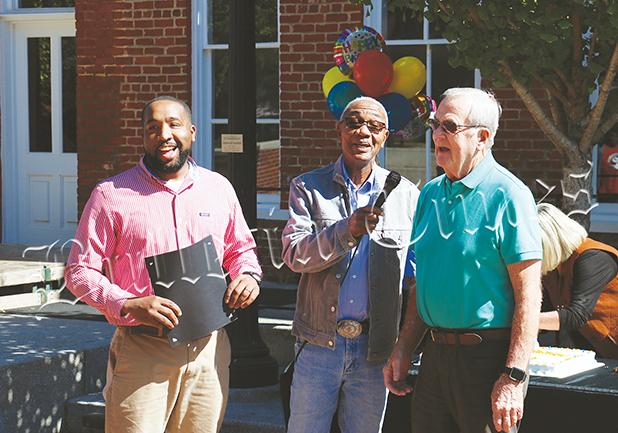 A Song in Their Hearts for Bolivar

Mayor Julian McTizic, State Representative Johnny Shaw, and former Mayor Barrett Stevens led the singing as Bolivar celebrated their 194th birthday on October 18.
Mayor McTizic read the following to the attendees at the Bolivar Downtown Amphitheatre:
WHEREAS, on this day October 18, 1825, the City of Bolivar was established by the state assembly to select a county seat; and named after South American patriot and liberator Simon Bolivar; and
WHEREAS, long before settlers came to the area one mile north of here, the Chickasaw Indians utilized the river, known as “Hatchie” as a crossing point and trading post. Hatchie Town soon began a settlement and used as the primary trading post for Hatchie Town from 1818 until 18 October 1825, until moving one mile south to the current area, due to extensive flooding; and
WHEREAS, major construction began in Bolivar in and around the square, adjacent to the Courthouse and many residences were log cabins in 1826; the oldest and last remaining original log home is the “Hazelgrove House” occupied by Major John Houston Bills; and
WHEREAS, by 1828 there were ten stores, five doctors, five lawyers, one commission house, one printing office, three taverns, one grocery store and mercantile stores that sold everything for the farmer, planter, trapper and timber cutter; and
WHEREAS, residents and travelers had to attain water from the public spring located on the southwest corner of Water Street; and
WHEREAS, in the early 1900s saloons were outlawed; police and fire departments were established, to protect and serve the people of Bolivar; and
WHEREAS, the city began to flourish and grow, with a Chamber of Commerce, a phone company, a new water plant, with roads being paved and utility infrastructure installed and school were established; and
WHEREAS, our city now has over 5,000 residents, many businesses, churches, parks, and moving toward modern broadband infrastructure, to further enhance and promote our community, improve our Court Square and Main Street; and
NOW THEREFORE, BE IT RESOLVED that I, Julian McTizic, Mayor of the City of Bolivar do hereby proclaim “A Huge Happy Birthday to our delightful city”, with wide avenues and pleasing places to eat, relax and shop; with a multitude of parks and wild spaces that allow walks among nature and places to enjoy the trails and the scenic indescribable beauty of the Hatchie.
IN WITNESS WHEREOF, I have hereunto set my hand and caused the seals of the City of Bolivar, Tennessee to be affixed, this the 18th day of October 2019.