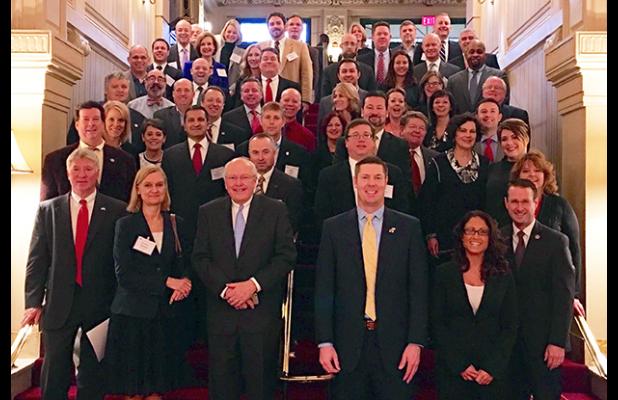 Recently, District Attorney General Mike Dunavant was honored to represent Tennessee along with colleagues at the National District Attorneys Association (NDAA) Capital Conference in Washington D.C.
They heard from and shared information with prosecutors from across the country, including U.S. Attorney General Loretta Lynch. They had very productive meetings with the Tennessee Congressional Delegation and the Department of Justice, and led a presentation at the National Meeting of Statewide Best Practices Committees of the Prosecutors’ Center for Excellence.
Tennessee is among the state leaders in the nation in the Prosecutor Best Practices movement.  As prosecutors, it is important that they provide their perspective and position on topics such as sentencing reform, funding for protection of victims, cellphone encryption, federal drug policy, civil asset forfeiture, police body worn cameras, law enforcement use of force cases, and mass shooting incidents. Public safety demands that we do all we can to promote a fair and effective response to crime in Tennessee and our nation.
State committees had an opportunity to share their experiences and successes with the group.
The following is an example of some of Tennessee’s accomplishments discussed:
Tennessee’s Justice and Professionalism Committee created a DVD series on the responsibilities of prosecutors. Each part of the series covers a different topic, including discovery, public records, privileges and immunities, and closing arguments.
Attendees also discussed the changing role of the prosecutor.  Participants shared the ways in which their jobs have evolved in recent years, including increased community outreach, alternatives to incarceration and intelligence-driven prosecution.  District Attorney Hillar Moore, a representative from Louisiana’s committee, delivered a presentation on the Baton Rouge Area Violence Elimination (BRAVE) program, a collaborative effort by prosecutors, law enforcement and community leaders to decrease violent crimes by youth offenders in the state.  Tina Guccione, an assistant district attorney from Rockland County, New York presented on the Partnership for Safe Youth, a center that provides “wrap-around services” for at-risk youth and their families.
The National Meeting created a forum for prosecutors from California, Colorado, Delaware, Illinois, Indiana, Iowa, Kansas, Louisiana, Maine, Maryland, Massachusetts, Minnesota, Mississippi, Missouri, Nebraska, New York, North Carolina, Pennsylvania, South Carolina, South Dakota, Tennessee, and Virginia to share their progress and to provide one another with advice on how to organize and run the Best Practices Committee.
For further information on the Best Practices initiative and Prosecutors’ Center for Excellence, please contact Kristine Hamann at khamann@pceinc.org