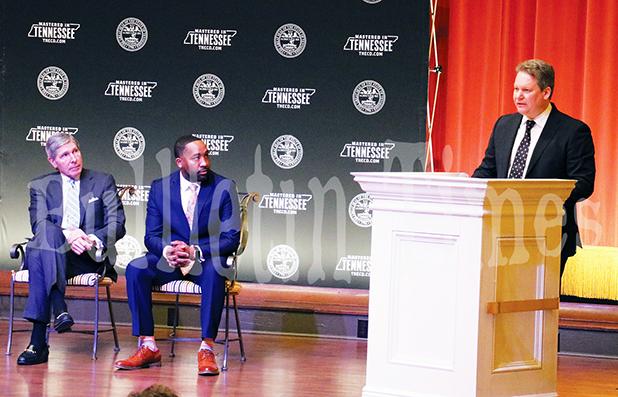 Good news came to the city of Bolivar for the second year in a row, as another business has made plans to make Bolivar its new home. Wall Innovations, an aluminum door and window manufacturer from Long Island City, New York, is relocating its manufacturing and distribution base to Bolivar, where the plant will invest $6.4 million and create 72 jobs over the next five years. The announcement was made on February 18 at the Luez Theatre in Bolivar.

“We are thrilled to be making the move to Bolivar. It was not a trivial decision as we had to find a supportive community that would work with us in logistical terms. The engagement and commitment we have experienced reinforces our decision in selecting Bolivar, Tennessee as our home base in the U.S.” said Wall Innovations, LLC president, Kyp Bazenikas (see photo right).

“I am very pleased that these jobs are coming to Hardeman County,” said Senator Page Walley, “This is a sizable investment. I congratulate Wall Innovations and all our state and local officials who helped secure these jobs.”

The new 18,500-square-foot facility will be built at the Bolivar Industrial Park, a Select Tennessee Certified Site, where the company will specialize in high-end and affordable architectural aluminum systems in continuity with its New York company, Alumil Fabrication, a U.S. subsidiary of Alumil Fabrications S.A.

“We are excited that Wall Innovations has chosen Bolivar to be the home of its manufacturing operations. Their selection of Bolivar is a great testament to our favorable business climate. The addition of 72 high-quality jobs coming to Bolivar and Hardeman County by Wall Innovations will positively impact our community. We thank Wall Innovations for

the investment in our community and wish them tremendous success in their endeavor,” remarked Bolivar Mayor Julian McTizic. “

“I’m very excited about Wall Innovations moving its aluminum door and window manufacturing plant to Bolivar. The prospect of 72 more jobs being added to the local economy is just another example of the attractiveness of this area to local business. Congratulations to the local officials and the folks at TNECD who helped make this possible,” asserted Representative Johnny Shaw.

In the last five years, TNECD has supported more than 60 economic development projects in the Southwest Tennessee region, resulting in nearly 10,500 job commitments and approximately $6.6 billion in capital investment. The Tennessee Department of Economic and Community development’s mission is to develop strategies that help make Tennessee the number one location in the Southeast for high quality jobs. To grow and strengthen Tennessee, the department seeks to attract new corporate investment to the state while working with Tennessee companies to facilitate expansion and economic growth.

In March of 2021, Choate Engineering and Performance chose to make Bolivar its home for manufacturing operations.