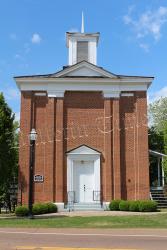 The Hardeman County Chapter of APTA will conduct its 44th Heritage Home Tour on May 5-6.
The tour will be from 10:00 a.m. until 5:00 p.m. on Saturday and on Sunday, May 6, from 1:00 p.m.–5:00 p.m.
The list of tour sites are as follows: The McNeal Place, The Pillars, The Columns, St. James Church, Ingram Hall, (lunch on Saturday only - $10 extra) Polk Cemetery with live characters, The Presbyterian Church (see right) and newly remodeled Luez Theatre. Homes on tour will be feature docents in proper era dress, that will be telling stories about the historical properties, homes and their owners.
The Pillars, Bolivar’s oldest brick home that was once a smaller federal style brick home built around 1826 by Robert Murray who sold it to Catherine Lea, wife of Saturday Evening Post publisher John Lea of Philadelphia in 1828. John Houston Bills, a successful settler purchased the house in 1837. Over the next thirty years, Bills oversaw the expansion of the house into its present form and furnished it through buying trips to New York, Boston, and Philadelphia. The home still has most of the original furnishings and artworks. The house once accommodated such notable guests as Andrew Jackson, David Crockett, Sam Houston, James K. Polk, and Jefferson Davis. The Pillars also served as a military headquarters and hospital during the Civil War.