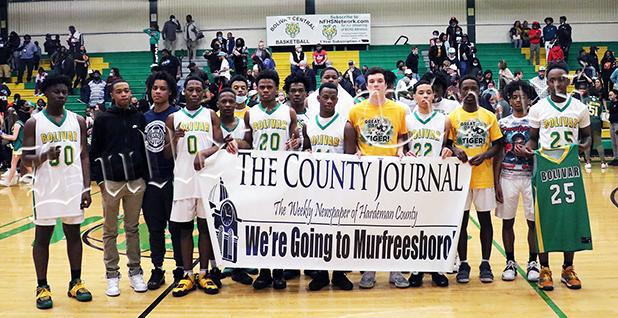 It was a year of milestones for the Bolivar Central Tigers as they will face Greeneville High School in the first round of the TSSAA Class AA High School Basketball Championships on March 17.
Milestone #1: The first one was reached on December 1, when four-year starter Jaquan Lax reached the 1,000 point mark in his career in a 70-58 win over McNairy Central. “I’m proud of him,” said Head Coach Rick Rudesill after the game. “He has started since he was a freshman and we knew this day would come.”
Milestone #2: In January, Rudesill reached his 850th career win in 76-69 win over Fayette Ware. The Wildcats, expected to challenge Bolivar for the District 15AA title, would get in Bolivar’s way a few more times before the season ended for them in the substate at Jackson South Side.
Milestone #3: Bolivar’s 100-77 win over Covington on February 2 clinched the Tigers’ first District Championship since 2012. Toris Woods had 45 points and 21 rebounds for the Tigers and got added to the potential list of Mr. Basketball candidates for the season.
Milestone #4: Woods’ 34 points, 30 in the second half, got him to 1,000 points for his career in Bolivar’s 87-54 win over Ripley. Wood’s reaching the milestone in the same year as a teammate (Lax on December 1) hadn’t happended since 2012, when D’Andre McKinnie and Trey Polk both got to the mark. “He’s a humble, hardworking kid,” said Rudesill. “And he worked hard tonight.”
Milestone #5: The win over Ripley gave Bolivar their 10th consecutive victory, the first time the Tigers had done that since 2012, when they won from January 20 until February 28, when a 61-59 loss to Jackson South Side in the Region 7AA semifinal ended their hopes of a fifth consecutive trip to Murfreesboro.
Milestone #6: Woods is announced as a Mr. Basketball finalist, the first since Willie Kemp in 2006. That same year, Bolivar’s Wayne Chism was made a finalist. If Woods were to be named Mr. Basketball, it would be the third in team history, joining Kemp and Petey Crisp with the honor.
Milestone #7: Bolivar’s 65-53 win over Fayette Ware was their third win over the Wildcats on the year but also gave Bolivar their first District Tournament Championship since 2012.
Milestone #8: Bolivar’s 82-44 win over Haywood was their 20th win of the season, the first time the team accomplished that since 2012.
Milestone #9: Bolivar defeated Fayette Ware 65-55 to win the Region Tournament for the first time since 2012.
Milestone #10: The hard-fought 51-41 win over Martin Westview in the substate gave Bolivar their first trip to the state championship since 2011.
When Bolivar tips off against Greeneville on March 17, it will be Bolivar Central’s 11th appearance at the TSSAA State Championship, which began in 1972 under Marvin Williams. Rudesill has guided the other 10 teams to the final eight, in 1998, 2002, 2004, 2005, 2006, 2008, 2009, 2010, 2011, and in 2021.
The appearance at the state championship has them looking for their fourth title, and the first since 2010. Their record at the state championship is 12-7.
Bolivar has never faced Greeneville. Greeneville is making their seventh appearance at the state finals and have a record of 3-5 overall. The team qualified in 2020, but did not play due to the cancellation of tournament.