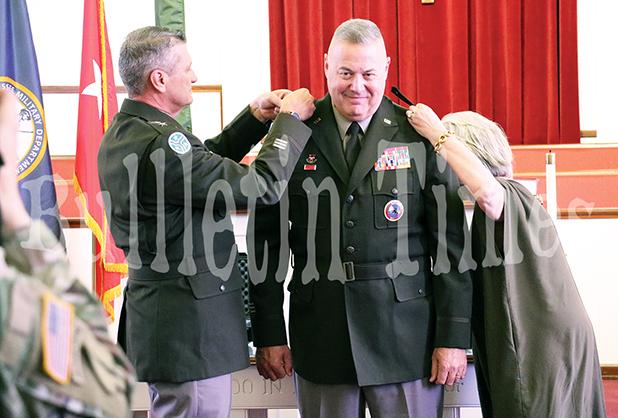 A ceremony at the Bolivar First United Methodist Church on Sunday, September 19 officially installed Warner Ross II to the rank of Brigadier General as the Hardeman County Director of Schools prepared to leave Bolivar for Nashville at the end of the month.

Ross began his military career more than 30 years ago, receiving his commission from Officer Candidate School after beginning his career as an infantry rifleman at Fort Benning, GA in 1990.  He spent his early years learning and developing his leadership while assigned to Infantry, Field Artillery and Cavalry branches across the Tennessee Army National Guard. His most recent assignment was as Commander of the 194th Engineer Brigade.

Ross commanded infantry, artillery, cavalry and engineer units at the company, battalion and brigade levels.  He served as a regimental fire support officer in Operation Iraqi Freedom in 2004 and as a squadron operations officer in 2010 with the 278th Armored Cavalry Regiment.  He served as brigade commander of the 194th Engineer Brigade and commander of Theater Engineer Brigade in support of Operation(s) Spartan Shield, Operation Freedom Sentinel and Inherent Resolve. Duty with warfighting units include: 1st Infantry Division, 38th Infantry Division and 42nd Infantry Division. He also commanded the 1/278th in West Tennessee.

His most recent Tennessee assignment was serving as the Director of the Joint Staff, Tennessee National Guard.  His experience with multi-echelon and multi-theater operational mission sets provides a unique perspective to the Joint Staff.  His planning and command participation in multiple joint training events include multiple joint projects in support of combat operations in the CENTCOM /Middle East area of operations and the 2015 Tennessee Maneuvers domestic training operations exercise.