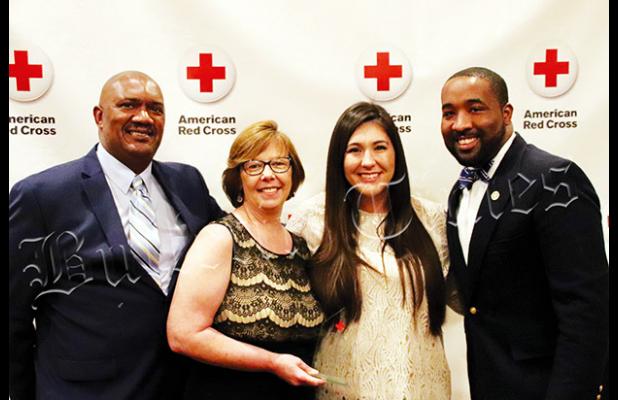 The American Red Cross-Midwest Tennessee Chapter has named local resident, Mrs. Sarah Rice as their 2019 Volunteer of the Year. Sarah is employed by the City of Bolivar and serves as administrative support for the Bolivar Fire Department and as the city’s social media manager.
Sarah has been a volunteer for the American Red Cross for over three years and currently serves as the Disaster Action Team Captain and Community Volunteer Leader for Hardeman County. She is also certified in mass shelter operations. In this role, she responds to and provides direct client assistance and resources to those who have lost their homes to fire or other natural disaster. The award was presented on Thursday, May 16, 2019, during the 2019 American Red Cross Heroes Luncheon in Jackson.
Presenter Heather Carbajal, Disaster Program Manager, said that American Red Cross response in Hardeman County has increased from an average of five responses in years prior to 2016 to approximately 25 per year from 2016-2019 since Sarah joined the American Red Cross chapter. In addition, one of the smoke alarm events that she helped organize led to two lives being saved during a house fire in December.
Fire Chief Lynn Price said, “We are so very proud of Mrs. Rice’s commitment to our community and our department, and we thank her for her service to both.”