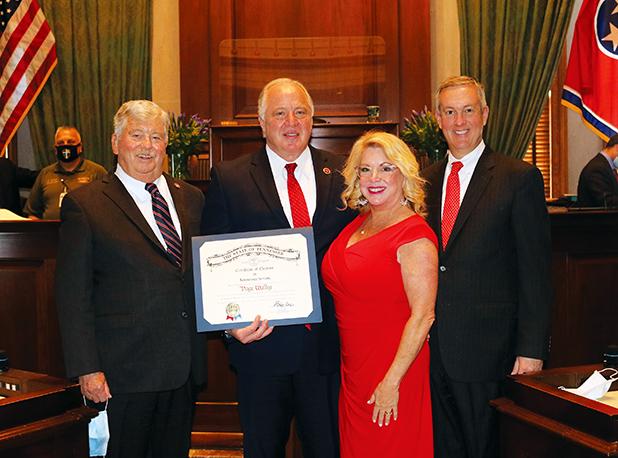 State Senator Page Walley and State Representative Johnny Shaw made Hardeman County history on January 12 in Nashville by taking office as the 112th General Assembly was gaveled into session. The 112th marks the first time Hardeman County has had both a senator and a state representative from Hardeman County.
Shaw, elected for the 11th time to the statehouse, is looking forward to the coming session, even with the country so divided at this time.
“I don’t consider myself a democrat or republican but I’m a public servant,” said Shaw (pictured right). “People will call and ask for something and add that they voted for me. I tell them, whoa, whoa, I serve you no matter who you voted for.”
Walley (top photo middle left with the Honorable William C. Koch, his wife Terry, and Tennessee Secretary of State Tre Hargett), who preceded Shaw as a state representative in the late ‘90s, was elected in November of 2020 to the state senate, the first senator from Hardeman County since A.O. Sipes in 1960.
“I am very honored to have the opportunity to represent the citizens of the 26th District in the Tennessee Senate,” Senator Walley said. “My pledge is to work every day to honor their trust. I also look forward to working with Governor Lee and my colleagues in the General Assembly to improve opportunities for the people of all Tennesseans, especially those in Chester, Decatur, Fayette, Hardeman, Hardin, Haywood, McNairy, and Henderson Counties which I am privileged to represent.”
Shaw and Walley also announced this week they procured a grant for the Middleton Library of $50,000.