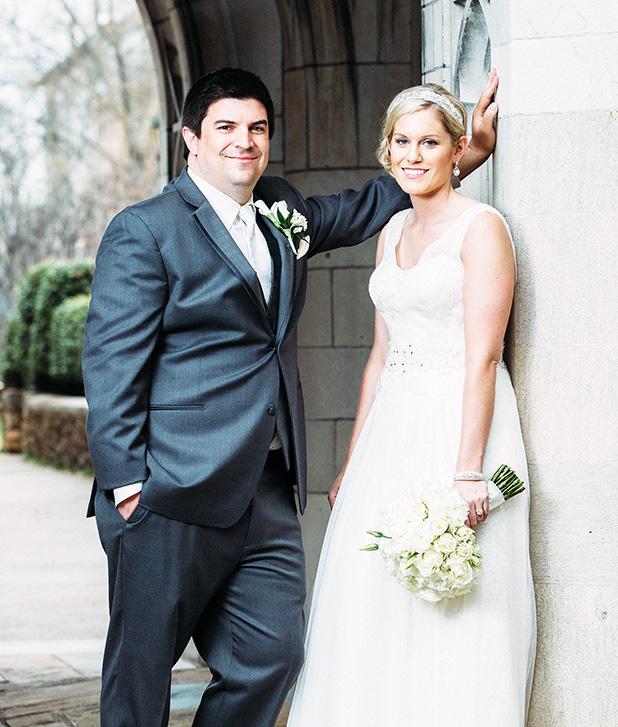 Leslie Ann Garside and Nicolas Membrillo were united in marriage March 21, 2015 at Wightman Chapel in Nashville, TN with Associate Pastor Eric Burton-Krieger officiating.
Parents of the bride are Phil and Cindy (Hurd) Garside of Jackson. Parents of the groom are Fernando Membrillo of Atlanta, GA and Azuzena Cruz of Madrid, Spain. Grandmother of the bride is Mrs. Norma Hurd of Jackson (and Bolivar).
Given in marriage by her father, the bride wore an Oleg Cassini formal length A-line tank bodice dress that featured beautiful and ultra-feminine lace accents, as well as eye-catching beaded embroidery at the waist and a sweep train.
The bride chose several friends from Jackson as attendants for the occasion: Lindsay Salter, who served as Matron of Honor, along with attendants Jennifer Wilkerson and Michelle Whitaker (formerly from Jackson). Other attendants, all from Nashville, were: Mollie Gass, Sara Michaels, Christina Webb, and Anna Edge.
The groom chose his best friend, U.S. Air Force Major Rick Hulun, as Best Man. Groomsmen were: Alex Membrillo, Johnathan Eyres, Manual Esparrago, Eric Mauritson, Seth Kelly, and Gary McBee.
Users were Don Garside, brother of the bride, and Daniel Membrillo, brother of the groom. Reader was Holly Schwettman and music for the ceremony was provided by Athena Strings Trio of Nashville.
The reception followed at "Ruby" in Nashville where heavy hors d'oeuvres and dancing were enjoyed by all. The DJ providing the music was Rob Philbin of Nashville.
Leslie is a graduate of North Side High School, Lambuth University , and Nashville School of Law. She is an attorney employed by Magnolia Title and Escrow in Nashville.
Nicolas is a graduate of Chattahoochee High School in Georgia and attended Vanderbilt University. He is a mortgage banker with Peoples Home Equity in Brentwood.
After a honeymoon trip to Antigua, the couple resides in Brentwood, TN.