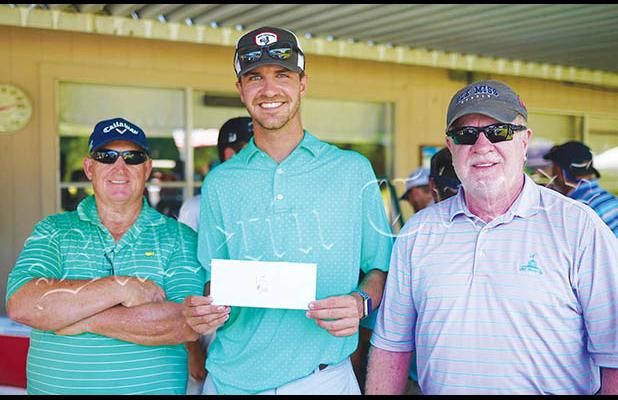 Thirty-four three-man teams played Saturday, July 18 in the Tyler Bomar Memorial Scholarship Tournament at the Hardeman County Golf and Country Club.
The team of Tommy Sain, Jon Sain, and Jon Harbin (see photo right to left) shot a 16-under par 56 to win the scramble format event.
Second place went to Steve Strope, Josh Bomar, and Don Bomar at 58, while in a two way tie for third at 59 was the team of Blake Sain, Blake Armstrong, and Chad Armstrong and the team of Curtis Stack, Jordan Stack, and Dennis Strope.
The second flight went to Dave Rhea, James Porter, and Mark Hunsucker at 62, with Richard Clifft, Dick Teubner and Darrell Teubner second at 63. There was a three way tie for third at 64 between the team of Blake Fawcett, Phillip Roberts, and Joseph Baugartle, the team of Ryan and Will Zawacki and Terry Richardson, and the team of Kenny Crockett and Kirk and Tanner Bumbalough.
Born in Jackson to Don and Donna Bomar on Monday, June 3, 1985, Tyler was a 2003 graduate of Bolivar Central High School, where he played golf and baseball. He was an avid duck hunter and was a sophomore majoring in Civil Engineering at Ole Miss. He passed away on January 15, 2005.