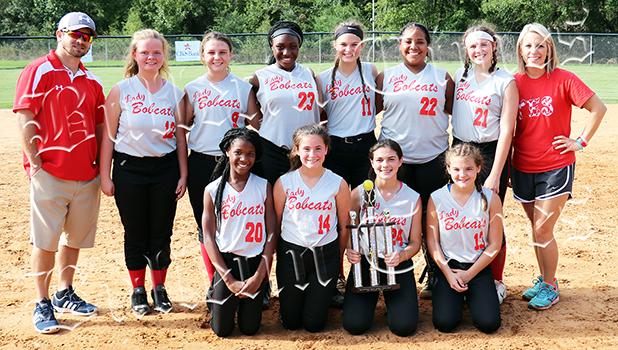 The Toone Lady Bobcats won their third Hardeman County Middle School Softball championship in the last four years, beating Hornsby 12-3 in the final game at Middleton Middle School Softball field.
“I’m extremely proud to be a Toone Bobcat,” said Head Coach Megan Roberts. “I was blessed with a great group of girls and very supportive parents.”
The Lady Bobcats got a complete game from Rylee Phillips, but the game remained close until the top of the third inning as the Lady Bobcats put nine runs on the board against Hornsby.
Earlier in the day, Hornsby beat Bolivar 5-0 and Toone beat Middleton 18-0. The opening game of the day saw Middleton beat Hornsby 9-3.
The last eight years have seen Toone win the championship three times, Bolivar once in 2017, and Hornsby won the championship each year from 2011 to 2014.