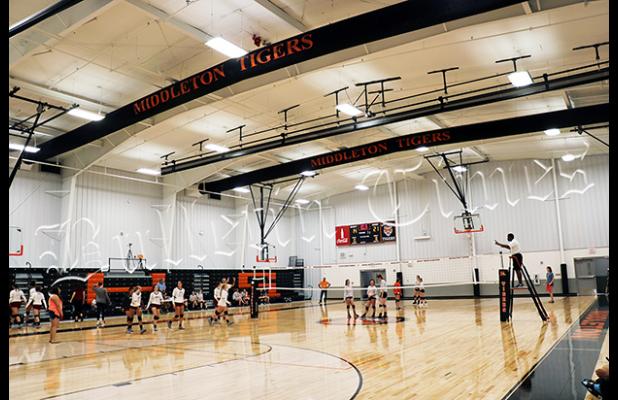 The Middleton Lady Tigers got their first win of the season as Middleton High School officially opened their spectator gym.
The match against Hardin County went five games with the teams trading wins (21-25, 25-15, 20-25, 25-15) in the first four contests before Middleton broke the cycle with a 15-7 win in the final game.
Leading the way for the Lady Tigers were Anna Leslie with seven aces, 15 assists, two kills, and seven digs, while Arianna Wells contributed one ace, 14 kills, and a dig. Dawson Sisco had an ace and seven kills, and Emma Robinson had four aces, eight assists, one kill and one dig.
Zeke Craft’s club, which has gone to the state tournament final eight two of the last four years, is 1-1 on the season.
They will travel to Crockett County on August 22 and play in the Freed-Hardeman tournament on 24 before returning home again to face Lexington on August 26.