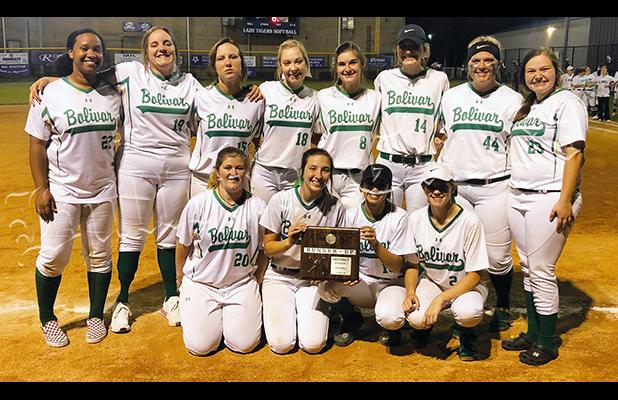 The Bolivar Central Lady Tigers beat Ripley 6-3 on May 7 to advance to the region tournament, clinching a top-two finish in the Distrct 15AA tournament. And while they subsequently lost in the championship game, the team reached their goal according to Head Softball Coach Dylan Hill.
“I can’t say enough about these girls. They have worked hard all season,” said Hill. “It’s been awhile since we’ve (Bolivar Central) been here.”
Bolivar will play either Melrose or Sheffield in Memphis on May 13. Hill said it was possible the game would be played at Bolivar, but no such arrangements had been as of yet. With a win in the first round, Bolivar would advance, probably to Covington. A win in the first round would guarantee a substate game, regardless of the result in the region final.
“We might have to play them again,” said Hill, speaking of Covington. Bolivar (16-5) has lost all four contests with Covington this season. Their only other loss was to Adamsville.
Making the All-District team were Josie Ingle, Maddy Piefer, Makayla Faulk, Bailee Barnes, and Shelby Woods. The All-Tournament team included Harley Morris, Brooklyn Jimmerson, Courtney Wilbanks, and Ingle.
Harley Morris and Bailee Barnes were named to the All-Academic team.