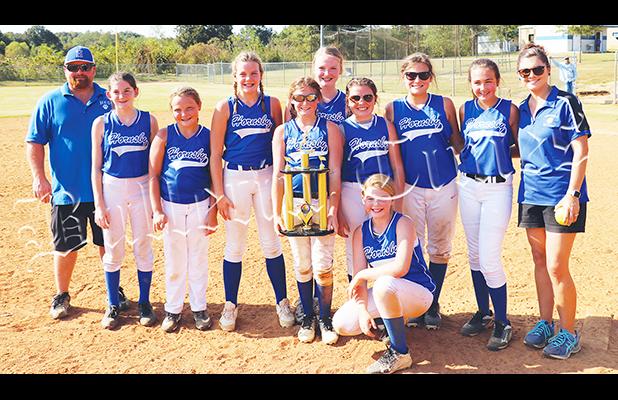 The Lady Bulldogs of Hornsby outscored their two opponents 29-0 to take the Hardeman County Middle School Softball title for the first time since 2014.
Hornsby’s 9-0 victory over Toone saw the Lady Bulldogs score three in the first, one in the second, two in the third, and three in the fourth, while pitcher Meredith Ross shut down the Lady Bobcats, holding them to no hits while striking out five in the process.
The game of the day saw Toone outlast Middleton 8-6 with a wild final inning that saw the Lady Bobcats score four in the final inning to take an 8-3 lead before the Lady Tigers got three of their own and left the bases loaded in the bottom of the inning to fall short. Toone’s Kenly Young struck out four Middleton hitters in getting the complete game win.
The first two games of the tournament saw Bolivar beat Whiteville 19-0, only to advance to a lopsided 20-0 blowout against Hornsby.
The last nine years have seen Toone win the championship in 2018, 2016, and 2015, Bolivar in 2017, and Hornsby won the championship each year from 2011 to 2014 before finding their way back to the title this year.