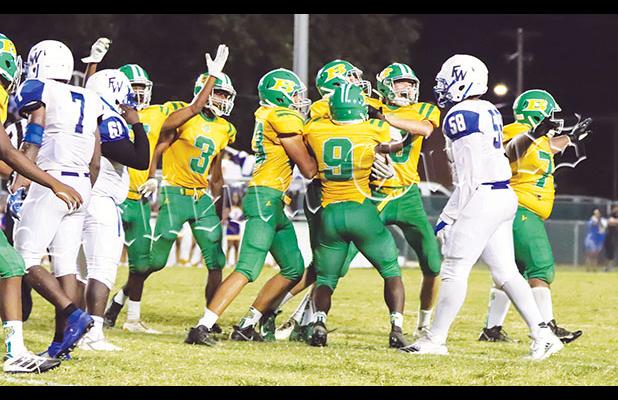 Bolivar Central (1-5) got on the board for the first time this season and scored their first victory as well, beating Fayette Ware 28-18 on homecoming night at R.A. Butler Field.
“We got one,” said Bolivar Head Coach Montrell Craft. “We’ve still got work to do, but we got one.”
The Tigers scored with 5:46 left in the first quarter of play as Omar Jones ran it in from two yards out. Jones, who gained 107 yards in 12 carries and a touchdown, became the first 100-yard rusher in a Bolivar Central game since Jalen Crisp had 142 yards in week nine of the 2018 season.
Bolivar scored in each quarter, pulling away to lead 28-12 with 11:41 left in the game on a Tyler Rice to Adarius Clark 13 yard touchdown pass. Fayette Ware scored late, but did not threaten again.
Rice was 6-12 for 72 yards with two touchdowns before leaving the game in the third quarter with an injury. Rayveon Gibbs ran for 77 yards and a touchdown, caught two passes for 22 yards, including another touchdown and intercepted a pass to earn the Vaughan Oil Player of the Game.
Photo by Sarah Rice.
•••
At South Fulton, Middleton (0-6) scored 22 points in the second quarter, but that’s all they could muster as they fell 40-22 to the Red Devils. The Tigers led at the half 22-16.
Playing without quarterback Luke Turner, the Tigers threw for 112 yards, their lowest total of the season. Backup quarterback Tyler Dickey led the Middleton attack with 140 all-purpose yards, which included running, passing, and receiving yards.