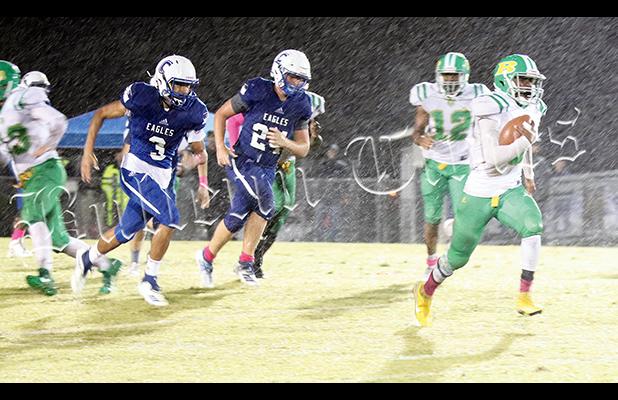 The pouring rain at Eagle Stadium in Henderson didn’t slow down senior Rayveon Gibbs as he and the Bolivar Tigers beat the Eagles 30-14 on October 25.
Gibbs’ night began with a 39-yard touchdown catch from sophomore quarterback Tyler Rice to give Bolivar an 8-0 lead with 2:51 left in the first quarter and the pair hooked up again in the second quarter, this time from six yards out.
Bolivar extended their lead when Gibbs picked up a fumble and ran 31 yards for his third score of the night with 3:04 left in the first half. For good measure, Gibbs ran in the extra point and the Tigers led 22-0.
Chester County began the scoring the second half, driving the length of the field to make it 22-8.
Gibbs then helped put the game away, returning the ensuing kickoff 70 yards for his fourth touchdown of night and a 30-8 lead.
On the night Gibbs caught three passes for 85 yards and ran for 98 yards on seven carries to earn the Vaughan Oil Player of the Game.
On the season, Gibbs leads Bolivar in scoring, rushing yards, rushing touchdowns, receptions, receiving yards, receiving touchdowns, return yards, and interceptions.