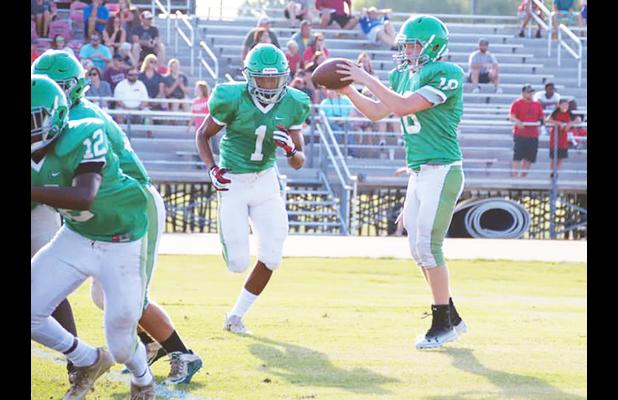 High school football teams in Hardeman County will kick off their seasons with road games on August 23.
Middleton will open with region foe Collinwood High School in Collinwod on August 23, but will have last year’s top passer in West Tennessee.
“Quarterback Luke Turner is back,” said Head Coach Craig Harris. “And although we lost our top receiver (Andre Hoyle) we have some talent to replace him.”
Harris said his offensive line is an experienced bunch, noting senior center Jackson Flanders will lead the group, while the defense has put in the hours over the past few months and weeks.
“I feel good that they put in a lot of hard work in the heat,” he said.
•••
Bolivar Central, 3-7 last year in Woodrow Lowe’s final season with the Tigers, will begin 2019 with an offense that first-year head coach Montrell Craft says needs some work.
“We’re making strides. We are trying to do some things to open up the offense a bit, but right now it’s not where we want it, but we are taking steps in the right direction.”
A defensive starter and graduate from the University of North Alabama, Craft said the team’s strong point will be their defense.
“It will be the strength of our team,” he said. “We have six starters returning and have more senior leadership.”
Craft, who played in the Canadian Football League prior to getting into coaching, said that special teams is extremely important to him.
“We have to be great on special teams. Our best guys have to play. Of course you want to get guys rested up, but if we rest players, it will be on offense or defense and not on special teams,” he said, adding his teams will be aggressive in returning punts and kickoffs. “Whenever we get an opportunity, we want our guys to make a play. We need them to be smart, but we don’t want them to be robots. But they know if they gamble, they need to win.”
Craft said he is enjoying the team atmosphere that has been created.
“It’s more of a family bond than just teammates. That’s what will be the difference this year.”
Bolivar opens at Freedom Prep on August 23.