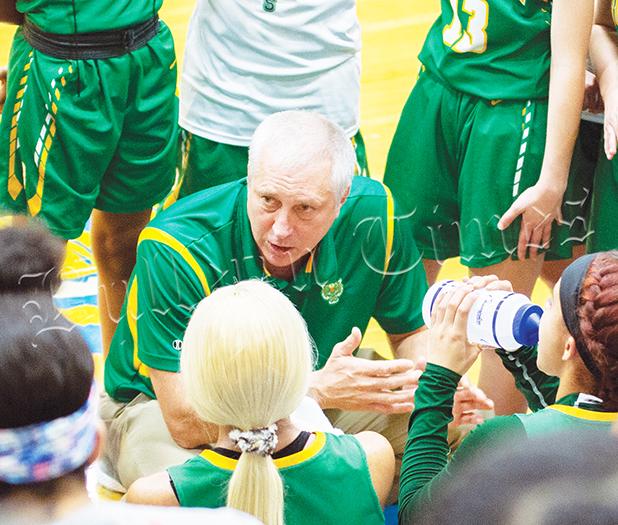 The End of THE Era?

The leader of the most successful run in Bolivar Central sports history stepped aside on April 26, moving to the to-be-reopened Jackson Central Merry High School this coming season where he will be the head boys basketball coach for the Cougars.
“I don’t want to go,” said Rudesill, who played at Jackson North Side and at Union University. “This has been my home for a long time. But I have an opportunity I can’t pass up. I just wish I could take my players and the kids I have gotten to know outside of basketball with me.”
Rick Rudesill’s run in Bolivar began in 1996 and his 26-years saw his teams win 801 games, including 13 trips to the final eight in Murfreesboro, 11 of them with the boys. Bolivar won three state championships and Rudesill coached three Mr. Basketball winners. Bolivar’s most recent success was this season as the squad made the final eight and had Toris Woods win Mr. Basketball.
Dick Teubner of WMOD Radio came to Bolivar the same year Rudesill did and became an instant fan of Bolivar Central Basketball and Coach Rudesill’s approach.
“Well, I for one will miss Rick. Not for three titles, although they were fun to broadcast. Not for 801 wins he coached, although I had the pleasure of broadcasting most of them. I will miss Rick, because he went beyond coaching. He cared for the young adults beyond the gymnasium floor. He wanted each of them to succeed beyond basketball as students and citizens. He once told me that he wasn’t interested in coaching beyond the high school level because he felt he could be a positive influence at the high school level more than at any other. Job well done my friend,” he said.
Rudesill began his career at the University School of Jackson, going 65-75 in his five years there before Bolivar Central Principal Fred Kessler brought him to Bolivar. Rudesill reached his 800th career win in 2019 and has 866 wins in his career.
From 2002-2011, the Bolivar boys went 266-65 and played in 10 straight sub-state games, going 8-2 in those contests. On the girls’ side, two Bolivar Central teams made the state tournament. Against rivals Chester County (23-1), Fayette Ware (17-4), Haywood (13-3), Jackson South Side (28-3), McNairy Central (23-1), and Middleton (15-1), the boys’ teams went 119-13, or a percentage of more than 90%.
Hardeman County Superintendent of Schools Warner Ross said Rudesill will always be remembered.
“Our students, school and community are blessed for having Coach Rudesill this past 26 years. The success he’s had and shared with our students, student-athletes and community has been noticed for many years. We were fortunate to have had him join our team and stay with us through the years. He’s been a great teacher, coach and mentor to so many. We wish him continued success and will always have the best of memories and hold a special place for him here in Hardeman County Schools,” he said.
Jackson Central Merry will be in the same district as Middleton next season, which means a Rudesill coached team will face Middleton for the first time since 2009.
According to Bolivar Central Athletic Director Mark Fulghum the job has been posted for separate boys and girls positions. Rudesill’s departure is the second team sport loss in two weeks, as Bolivar Central Head Football Coach Montrell Craft announced he would not return for 2021 on April 16.