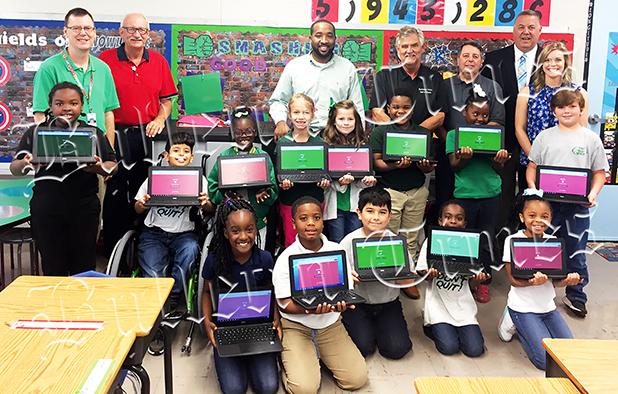 As a part of their 2018-2019 budget, City of Bolivar Mayor Julian McTizic and the City Council partnered with Bolivar Elementary to provide a Chromebook Cart. The cart includes 25 Chromebooks and includes a cart that stores and charges the devices. The Chromebook Cart will be housed in the library and used across multiple classrooms, Principal James Rutherford said, “We are very excited that Mayor McTizic and his team chose this idea to help our students and school. There are so many things that third graders will be able to use this technology to do. Our students are already excited and using the Chromebooks every day.” The donation of the Chromebook Carts supplements the Hardeman County Schools technology plan and specifically focuses on 3rd graders across the district. The Chromebooks are small, basic laptops that connect to the Internet using Google’s Chrome operating system.
With a Chromebook, students can tap into the power of the Internet—and because the devices include keyboards, students build essential keyboarding skills, required by many state standards, as they research, collaborate, learn, and create. School Board Chairman Bobby Henderson worked with Mayor McTizic during the spring to develop this idea. Henderson noted that, “Mayor Mctizic was on board and very receptive to helping our schools do more with technology.”
Pictured L-R Principal James Rutherford, Buddy Nelms, Mayor Julian McTizic, Bobby Henderson, Kenny Adkins, Warner Ross and 3rd Grade Teacher Stacy Moore and Bolivar Elementary 3rd Grade students.