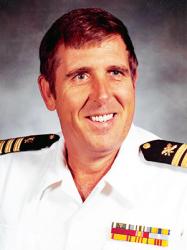 Bobby Joe Rosson, age 80 of Whiteville, passed from this life early Monday morning, Feb. 29, 2016 at his home.
Graveside services were held Thursday, March 3, 2016 at the West Tennessee Veterans Cemetery in Memphis, with Bill Sorrell officiating, and military funeral honors provided by the United States Navy. The family received friends Wednesday evening, March 2, 2016 at Shackelford Funeral Directors in Bolivar.
He was a native of Pocahontas and lived his early years in Hardeman County. He graduated from Bolivar Central High School with the Class of 1954. On June 28, 1957, he was united in marriage to Emily Moore, who survives.
He retired in 1979 from the United States Navy as a Navy Commander. He served our country for over 24 years, including two tours of Vietnam. He received his Bachelor of Arts degree from Memphis State University as well as a master’s degree from Webster University. Following his retirement from active duty, Commander Rosson taught Navy ROTC near St. Louis before moving back to Hardeman County in 1986.