Albert Lloyd Keller, age 93 of Toonee, passed away Thursday morning, Feb. 4, 2016 at his home.
Funeral services were held Saturday, Feb. 6 at Toone Baptist Church with Anthony Vaughn and Gary Holt officiating. Interment followed in Rainey Cemetery. Shackelford Funeral Directors of Bolivar provided the professional arrangements.
A lifelong resident of Toone, he was born Saturday, Dec. 30, 1922 to the late A.C. and Bertha Teague Keller. He graduated from Bolivar Central High School, where he played on both the football and basketball teams. On June 21, 1944, he was united in marriage to Virginia Keller, who preceded him in death April 22, 2002.
Mr. Keller was a farmer, a cattleman, and a businessman. He served his country in the United States Army in Europe during World War II, and was a State Representative of Tennessee in Nashville in the early 1960s. He was a member of Toone Baptist Church, where he was a former Deacon. 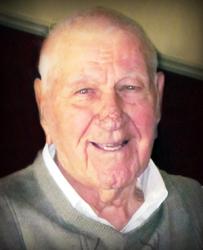