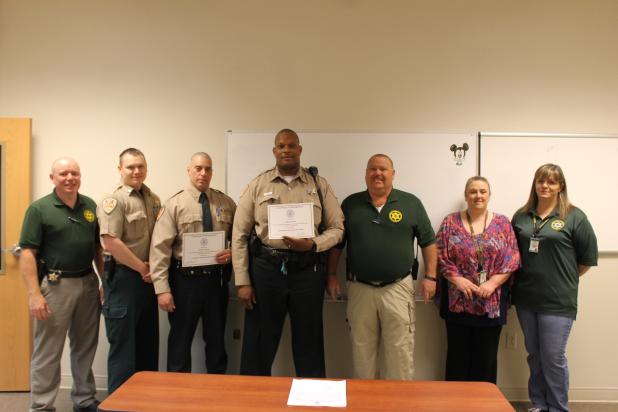 Officers honored for saving a life

Four officers in Hardeman County were recognized and honored on Thursday morning, March 26, five days after they worked together to rescue a woman trapped inside her vehicle.

Whitevilel Police Captain Ben Davis, Hardeman County Sheriff Deputy Vincent Hunt, Deputy Joseph Brewer and Communications Officer Cheri Baker all received letters of commendation for their work in going "above and beyond the call of duty" according to Sheriff John Doolen.

“We would like to commend Captain Ben Davis of Whiteville Police Department, Deputy Vincent Hunt, Deputy Joseph Brewer of Hardeman County Sheriff’s Office and Communications Officer Cheri Baker for providing exceptional emergency services. On March 21, 2015 at approximately 0743 hours, a motor vehicle crash was reported. It was later determined that a lady had been trapped inside her vehicle, which was upside down and submerged in water, for many hours,” said Captain Dana Knight. “The temperature was in the 40’s on the morning of March 21, which caused the water to be extremely cold. All four mentioned did not hesitate to wade into the cold water to assist in saving this young lady’s life. If it was not for the bravery and selflessness that these four displayed, the young lady may have lost her life that morning.”

All four officers worked together in the water to turn the car back over and rescue the trapped individual.

The lady, according to Knight, was released from the hospital and is expected to make a full recovery.