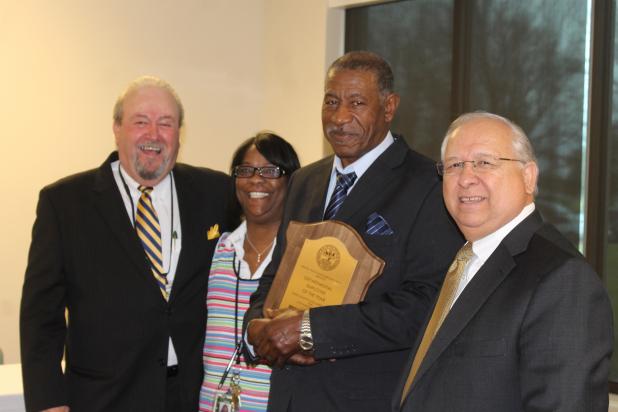 Western Mental Health Institute's James McGowan has been named Tennessee Department of Mental Health and Substance Abuse Services (TDMHSAS) 2014 Employee of the Year. McGowan began his career in 1973, after returning from service in the Vietnam War, as a custodian and rose through the ranks and was named Property Officer I.

McGowan was named Property Officer In in 1998 and has remained in that position. Remembered as someone who is constantly reliable and dependable, as well as a hard worker, McGowan was honored in a room full of his fellow co-workers and family on Tuesday, March 31 at Western Mental Health.

"I have a deep respect for patients as well as the professional staff here who are dedicated to serving people with mental health conditions," said McGowan. "I consider everyone here my friends."

"James McGowan is more than just a team player, he's an extremely caring and compassionate person," said Pursley. "He has served his colleagues as well as the patients and their loved ones with a willingness to address any problems or concerns he may encounter."

For complete coverage of this event and the award, catch next week's Bulletin-Times.