A flag that flew over the United State Capitol and a copy of the proclamation that was placed in the Congressional record were presented to Frank Zaller, in preparations for his 100th birthday on August 29.
“Frank Zaller is a member of what has rightly been called our Greatest Generation...” it begins, and lists his accomplishments both in war and peacetime.
There will be a parade in Bolivar for Zaller on August 29, with line-up at Bolivar Elementary School at 9:45 a.m.
The presentation at Zaller’s home on Main Street was also attended by Hardeman County Mayor Jimmy Sain and Bolivar Mayor Julian McTizic. 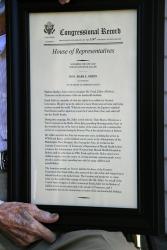