The Hatchie Chapter of the Daughters of the American Revolution (DAR) were very proud to present Evalyn Harris of Bolivar with her sixty years of service pin.

Mrs. Harris joined the DAR in October of 1960 and has remained a steadfast member serving the chapter and community as Regent, Vice Regent and Chaplain.

“We have been blessed by her graceful countenance and outstanding leadership throughout these sixty-plus years and look forward to many more,” said Hatchie Chapter Regent Sharon Venti.

The Daughters of the American Revolution has more than 1,000,000 women since it was founded over 125 years ago. They became members to honor their heritage as well as make a difference in their communities across the country and the world. 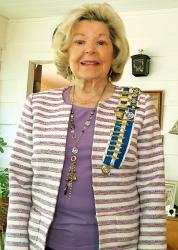 By:
Photo and story courtesy of Sharon Venti.