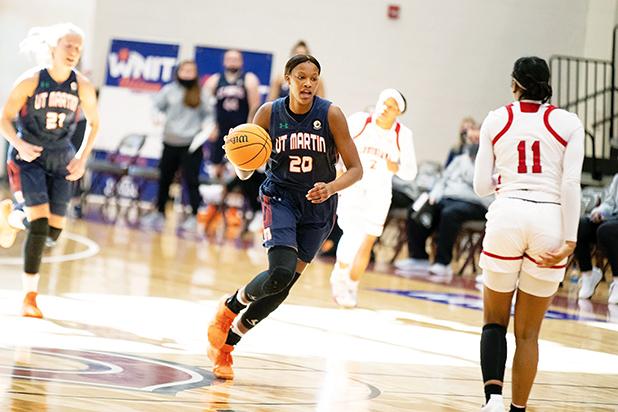 Former Middleton Tiger and University of Tennessee at Martin women's basketball star Chelsey Perry made history by being selected 26th overall by the Indiana Fever in the third round of the 2021 WNBA Draft.
Perry is the first player in Middleton High School and UT Martin history to be taken in the WNBA Draft and the highest selection in OVC history. She is a two-time OVC Player of the Year and 13-time OVC Player of the Week while also leading the program to back-to-back league championships and becoming the first OVC team to wins multiple postseason contests with two victories in the 2021 WNIT.
“I am just so happy to be picked by the Indiana Fever,” Perry said. “This is such a humbling experience to even be listed and given this opportunity. I am so excited. I just want to thank my hometown, Hardeman County, my family, friends and everyone who has supported me over the years. I could not have done it without them.”
“This is truly an unbelievable moment as our team sat together and watched the WNBA Draft rooting for Chelsey,” UT Martin head coach Kevin McMillan said. “To know her and where she began her career out of Middleton as a freshman and how she has improved to her senior year is amazing. This is a tremendous honor for her and is unbelievable. To make history for our program and our league is amazing. It is really hard to get drafted in this league, not many can say that. We are so proud of Chelsey.”
Perry leaves UT Martin as the program’s all-time leader with 228 career blocks while ranking third with 1,963 points, fourth with 733 field goals made, fourth with 768 career rebounds, fifth with 368 career free throws made and eighth with 129 career three-pointers made.
The three-time All-OVC honoree ranked 11th nationally with 22.9 points per game while leading the OVC in scoring along with field goal percentage (50.2 percent) and field goals made (164) in 20 games. She also ranked amongst league leaders in free throw percentage (83.3, third), blocks per game (1.7, third), defensive rebounds per game (5.7, fourth) rebounds per game (7.2, sixth) and three-point field goals per game (1.8, eighth). She scored in double figures 18 times while starting out the season by scoring 20 points or more in the first 11 games – ranking as one of just two players in the country to accomplish that feat.
Perry tallied five 30-point performances but arguably saved her best offensive outing for the postseason when she scored 37 points in the WNIT against Louisiana where she went 13-of-17 from the field and 6-of-7 from beyond the arc. She also tallied seven double-doubles on the year and 16 games with five or more rebounds.
All of this came off a highly decorated season in 2019-20 in which she exploded on the national stage after she was selected to the WBCA Coaches’ All-American honorable mention team while also being named a finalist for the Becky Hammon Mid-Major Player of the Year Award. During her junior campaign she ranked first nationally in field goals made (286), second in total points (740) and third in both points per game (23.1) and field goal attempts (386) while also sitting 11th nationally in blocks (86) and 17th in blocks per game (2.69).