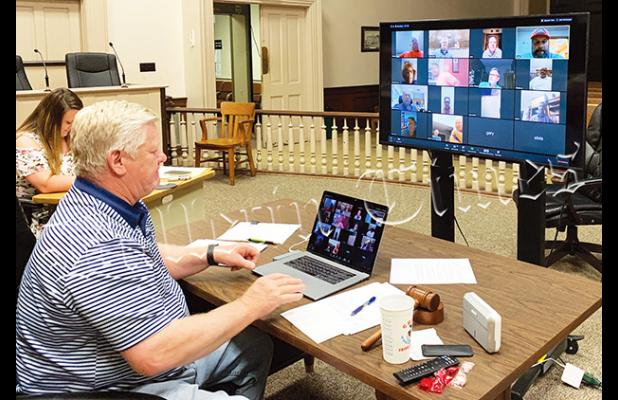 The Hardeman County budget will be presented to the Hardeman County Commission on June 2 in a virtual meeting format using Zoom, but plans are to hold the first traditional meeting since February for a public hearing and final vote on the 2020-2021 budget later in the month.
Hardeman County Mayor Jimmy Sain says it’s difficult to predict revenue in the coming year, but is certain revenues will be down because of the COVID-19 virus economic shutdown.
“We were down $30,000 last month in sales tax. It may end up about $70,000 less for the year than projected because of the virus,” he said.
Sain expects the Hardeman County Schools to have their numbers ready by the June 2 first reading.
If passed on June 2, the next meeting is expected to be scheduled for June 16. The final reading would include a public hearing prior to the final vote, which would seem to require the meeting to be held in the traditional fashion in an open courtroom format. If passed on the second reading, it would make the budget official.
Last year both the schools rate of $1.46 and the county rate of $2.55 remained the same, but not without much discussion and a last minute change. The commission eventually rejected the budget committee’s vote to set the rate at $1.40 while offering equivalent dollars that would have gone to debt service, instead voting to set the rate at $1.46 with no other provisions.
With the uncertainty, Sain has asked Hardeman County department heads to try to keep their spending the same as in the previous year.
“We are asking them to hold to last year’s numbers,” said Sain.
The 2019-2020 fiscal year, while about to come to a close, is still unsettled due to the July 2019 lawsuit filed by Sheriff John Doolen against Hardeman County Mayor Jimmy Sain, seeking more funding for his department. A hearing to settle the dispute went unfinished on February 27, and remains in limbo because of a suspension of court proceedings due to the COVID-19 restrictions. How an eventual ruling on the 2019-2020 budget in favor of either side could effect maintenance of effort remains unknown.
The county rate has not changed from $2.55 since Sain took office in 2014. The Hardeman County Budget Committee consists of commissioners Jackie Sain, Chris Bell, and Johnny Lanier, with Junior Jimmerson and Chairman Jerry Watkins rounding out the committee.
The first reading and vote traditionally is passed without much resistance from the commission. Last year’s vote went 16-0 in favor at the first reading, but a vigorous discussion and a 12-4 vote was the margin at the final reading.
Zoom is a cloud platform for video and audio conferencing, collaboration, chat, and webinars across mobile devices, desktops, telephones, and room systems.