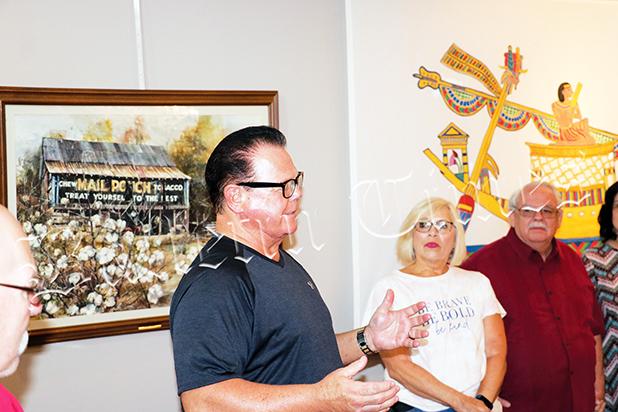 The Hardeman County Arts Council dedicated their lobby to Helen Stahl, who made Hardeman County her home. Stahl passed away in May of 2016 at the age of 86.
The Helen Stahl Memorial Art Gallery commemorates the life and work of Stahl, who played a significant role in the early development of the Hardeman County Arts Council.
Hardeman County benefitted greatly by her presence. After retirement from teaching in Memphis, she purchased land in Hornsby, where she built a house and lake, and remained there for the rest of her life.
She was a member of various professional watercolor societies, was featured in several publications, and received numerous national, regional and local awards. She built many things, including bridges, fences, gates, tables, chairs, a runabout boat, and a six foot grandfather clock, restored antique vehicles, and was a member of the British Sport Car Association.
She volunteered her talent to many, including the Hardeman County Arts Council, Hardeman County Hee Haw, and the local animal control shelter. She was very generous with her artwork, often donating many of her pieces for fundraisers.
Her career included commercial art, consulting to advertising agencies, and teaching art at Treadwell High School, with many former students becoming well-known artists as well.
Stahl’s work will be on display during the month of June at the Arts Center, which will have regular hours on Fridays and Saturdays from 10:00 a.m. to 2:00 p.m. Other exhibits will follow, according to Hardeman County Arts Council Visual Arts Director Fred Asbury.