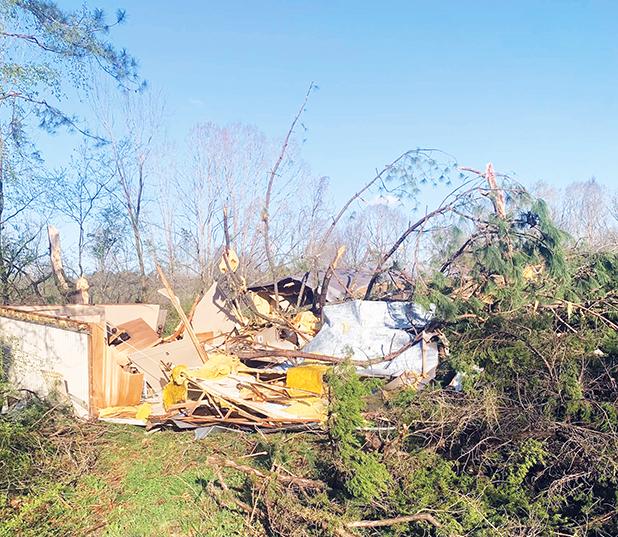 While the experts from the National Weather Service scratched their heads as to what to call it, residents of Grand Junction and areas around the city were still waiting on power to be restored after the early Sunday, March 28 storm that crossed southern Hardeman County.
“We’ve had a ton of property damage,” said Grand Junction Mayor Curtis Lane. “But no injuries were reported.”
Lane said all streets were blocked for hours and there was no power at all in the city well into Sunday. Even as of Wednesday morning, power had still not been restored to all areas as crews worked with more than 200 damaged poles, downed lines, and downed trees.
The storm then continued across the southern part of the county, through Saulsbury, Middleton, and Pocahontas.
According to the National Weather Service (NSW), initial indications were that the 70-80 mile per hour winds were more consistent with straight line winds instead of a tornado, as the storm cut a three-mile wide path through the heart of the city. However, the NSW still hadn’t ruled out the possibility of a small, brief tornado within the storm.
And with rain continuing to come down on Tuesday, the crews were still hampered in their efforts to restore services.
Hardeman County Mayor Jimmy Sain, who surveyed the damage, said he felt the county dodged what could have been a major catastrophe.
“As I surveyed the storm damage in the south part of the county, I quickly realized that much is to be thankful for. There were no major injuries or deaths reported. We are blessed by the first responders in our county that are always there to help and repair,” he said.