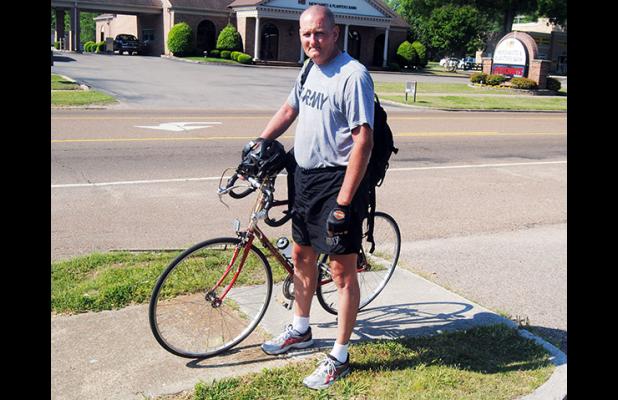 John Townsley, a retired Army veteran of 29 years, from Memphis, TN., spent Tuesday night, May 5, in Bolivar after completing the first day of a bicycle trip that will take him to New York City. The ride is an effort to raise money for Wounded Warriors.
“I was having some problems adjusting when I returned home from Iraq in 2010, and Wounded Warriors helped me out a lot. In addition, I almost died last year from a spider bite that I received in Iraq that took five years to do the damage to me. It took me almost a year to get healthy enough to do this. Wounded Warrior programs are free to veterans and I just wanted to give something back,” Townsley said.
Townsley was hoping to make it to Nashville by the end of the day on May 7. He plans to travel through Knoxville and Bristol, then travel through Virginia. He is hoping the trip will take about 20 days.
As of Wednesday morning, Townsley raised about $300. His goal is to raise $40,000. Contributions can be made through his website ride4vets.myvagsite.com.