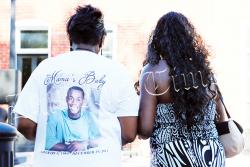 Bolivar residents, community leaders, law enforcement, family and friends gathered at the Bolivar Downtown Amphitheatre for the United We Stand Community Day to serve as a reminder of what has happened in our community along with raising awareness and hope for change. MAGNUM (Men/Mothers Against Gun violeNce Unity Movement) sponsored the event on Saturday, July 29.
Caleb Minter, songwriter, musician and entertainer, founded the MAGNUM program after his brother Clarence Minter of Bolivar was killed by a gunshot wound in his home on December 19, 2014. Minter says that he didn’t know how to feel after the murder of his brother and he “started the movement to bring the community together and to educate about gun violence and how it affects the family and community.” Minter and his group gave of their time, resources and talents to perform following the speakers including Gone Too Soon, a song that Minter wrote after the passing of his brother Clarence.