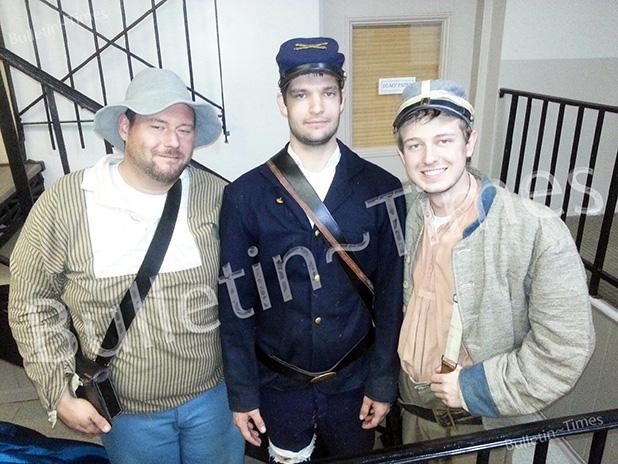 “I’ll be on you faster than a duck on a June bug!”, “That dog won’t hunt here!”, “You’re lower than a scab on a cur-dog’s behind!” These, and more, old Southern colloquialisms are scattered throughout the dialogue in Phillip Collins’ production of “Counterfeit Confederate”, a play he wrote, produced, and directed. As frequently as these sayings brought forth laughter there were moments that brought tears to the eyes of some audience members.
Presented this past week in Jackson at the little theater in the Carnegie Center of Arts and History, the play is set near the Battle of Brittons Lane which was fought on September 1, 1862. Its theme, “Soldiers leaning on the everlasting arm” was brought about by Collins’ upbringing in Brittons Lane, his love of Civil War history, and his personal religious convictions. “As I researched this, everywhere I went it was apparent these young men were looking for salvation. They would literally be stepping across the bodies of their fathers, their brothers. They wanted to know for sure if a bullet ended their own life, they would be saved,” He said. “They would actually stop the war on Sunday, worship, and resume the battle on Monday. Not only the Confederates but the Federals as well.”
In opening, based on documents preserved from that time, Emily Burlison and Becky Reeves portray mothers of Confederate and Federal soldiers as they read aloud letters received from their sons. The letters are different, yet the same as the young men express their love, hopes, dreams, and optimism for their future return home from the war.
Trebor Briley is cast as a Confederate soldier. He has captured a Federal, played by Chris Eskew. Both are barely out of their teens. Having fought against each other at the Battle of Brittons Lane, they somehow became separated from their units and find themselves in an abandoned house. The Reb has shot his Yankee prisoner in the leg and has him “hog tied”.
The opening of their scene is filled with hate. Johnny Reb strongly expresses his feelings toward his northern foe.